With so many of us back on the course, it was probably not surprising that I received a good number of your wildlife sightings. Many thanks for all of these contributions.

When absent from anywhere for a while, the instinct is to notice changes and April is a month of transitional change anyway. Most of our trees now have leaves, more wildflowers are appearing including the Marsh Marigolds in the pond, and birdsong is much more in evidence. One new feature that delighted me was the “Bug Hotels” at the back of the 9th tee. Appropriately labelled (in case we thought that they were just piles of logs!) they will quickly be adopted by a wide range of invertebrates. Those will include both valuable pollinators and creatures vital to the food chain for birds and larger animals. I will endeavour to identify some of the residents in the months to come.

Bird news included Chris and Lynn Littlewood being the first to report a Swallow over the course on the 10th of the month, three members watching five Buzzards together (two of which were in courtship display), a range of birds taking advantage of the well-stocked clubhouse feeders and Pied Wagtails seen taking nesting material into the barn on the 8th.

Harry Woods has often mentioned the Mandarin Ducks which congregate in his garden and pairs have been seen regularly flying over the course. In most instances, the latter will have been seeking a nesting site as, surprisingly, this species nests in large tree holes and often some distance from the lakes and streams where we are more used to seeing them.

Patrick mentioned another Water Vole sighting which I find very exciting. These delightful creatures were all but eradicated locally, by falling prey to released American Mink, but are fighting their way back after a lengthy programme to remove the Mink. I was never convinced that Kenneth Grahame did them any favours by naming one “Ratty” in The Wind in the Willows. This month’s photo image was taken at a different time of year as you can tell from the Blackberry.

As ever, lots to see and enjoy as we strive to improve our golf. 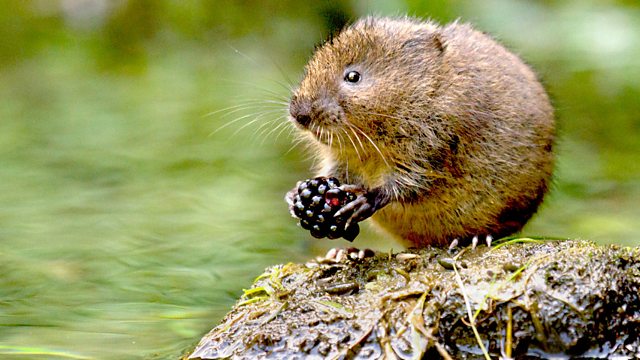